Home > Dog in sunglasses used by airport to scare away birds 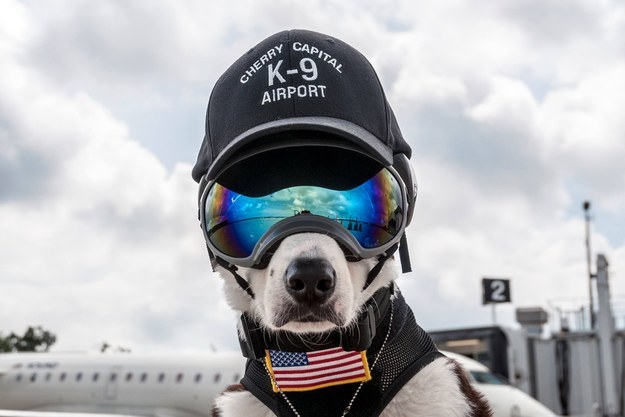 So here is a nice story to while away the time if you are waiting in the airport for a delayed flight.

Cherry Capital Airport in Michigan, USA have employed a dog to scare away birds and other wildlife which can cause serious damage to planes taking off and coming into land.

As is common with all commercial airports, Cherry Capital have used the normal methods for wildlife control such as removal of sources of food and water and installing bright reflective strips. They have now gone one stage further by actually employing a dog called Piper and his owner Brian Edwards to scare away wildlife on and around the runway. Piper has been specially trained so that Brian can now simply point at any wildlife and Piper runs straight at them to scare them away.

Since Piper has joined the team there has been a noticeable reduction in birds and other wildlife in the airport vicinity making take off and landings much safer. If birds are allowed near runways they can get sucked into engines during take off or landing, causing damage, fires and even can result in engine failure. Birds can also damage aircraft wings and have even been known to crack windshields.

Bird strikes are commonly cited as the reason for a delayed or cancelled flight. Airports are required to keep their grounds and airspace clear of wildlife under arrangements they have with airlines. Any bird strike occurring in their vicinity may result in a claim for flight delay compensation.