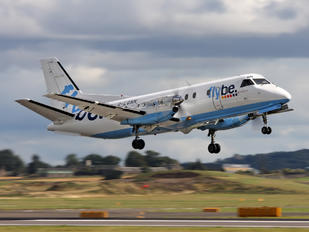 A Flybe plane operated by Logonair charter flight was forced to make an emergency landing on 2nd October when hydraulic fluid was seen leaking from one of the wings by a passenger.

The flight from Rotterdam to Aberdeen had just 17 passengers on board but one of them, William Roberston, spotted red fluid leaking from one of the wings during take off. Before he could report the leak, the pilot announced that they had a hydraulics problem over the radio and they would have to burn off fuel then make an emergency landing back at Rotterdam.

The emergency services were scrambled and, shortly afterwards, the Saab 340 plane successfully landed back at Rotterdam. The problem was, the hydraulics affected seem to have related to the brakes. The plane began running away until the pilot had the forethought to steer onto the grass at the side of the runway.

Everyone successfully exited the aircraft but the passengers were left shocked and their flight had to be cancelled. A replacement flight was eventually laid on and so the passengers finally arrived in Aberdeen relieved but somewhat delayed.